Introduction
This post walks through the analysis of the execution of 2 chunks of shell codes which are part of the file "51edea56c1e83bcbc9f873168e2370af", that lead to the decoding and unpacking of the stage 1 dropper.

Identify, Extract and Decode the First Chunk of Shell Code
After analyzing the byte distribution of the file, you would realize that there large portions of text that are hex encoded strings. Visually inspect the file from top-down, disregard strings that are not repetitive sequences of one or two bytes and disregard strings that are not within the hex encoding byte range (0x0 to 0xF). You should arrive at the first chunk of shell codes at line 105 of the file. Refer to the post Red October [Hex Code Analysis] for more details on analyzing hex codes.

Because shell codes do not come in the structure of a PE file, IDA will  treat the file as a binary file and not resolve any functions, imports or exports. It would be helpful to look at the strings, and resolve functions within the shell code; after which you would arrive at the function of interest at 0xF1.

Analyzing sub_F1
Notice the first line of the function sub_F1, it is comparing a value on the stack with the string "T@TP". Note that the values on the stack are stored in little endian, as such, the actual value compared is "PT@T". Remember this string. Now note the "pusha" instruction at 0x13A; this instruction pushes the contents of the general-purpose registers onto the stack (read more here), and is typically done before an unpacking/decrypting routine.

XOR Decoding Routine
After the registers are saved using the "pusha" instruction, the function proceeds to a xor decoding routine at  0x13D, with the xor key being used at 0x165.

We find a similar flow as that of the first chunk of shell code. The instruction at 0x14A is comparing a value on the stack with the string "iNYD". Note that the values on the stack are stored in little endian, as such, the actual value compared is "DYNi". Follow the function flow and find the "pusha" instruction at 0x218 and subsequently the start of the xor decoding routine at 0x21B and the xor key 0xDE being used at 0x23D.

Extracting and Decoding the Packed Dropper
Based on the information gathered from analyzing the second chunk of shell code, we can proceed to extract and decode the packed dropper. Find the string "DYNi", extract the bytes and XOR ^ 0xDE decode them to get the packed dropper binary.


Introduction
This post will walk through the unpacking of the dropper msmx21.exe. Analysis of the binary reveal that the file "2719a0e95075802e22008f7530ea8f99" is likely to be packed. To quickly unpack the dropper, we set break points at VirtualAlloc and start off debugging from there.

Shell Codes
The first memory allocation is a VirtualAlloc of size 0xA34. Here you will find that shell codes are written to that memory location that will be responsible for unpacking the stage 1 dropper.


Unpacking of the Stage 1 Dropper, msmx21.exe

Observe the next memory allocation, VirtualAlloc of size 0x6100. Analysis will surface that the shell codes shown above unpack msmx21.exe and write it to the memory location 0x40630.

Dumping msmx21.exe
The stage 1 dropper msmx21.exe is dumped from memory.

Next >> Analysis of the dropper msmx21.exe
Posted by vahilor at 10:21 No comments:


Introduction
This post walks through the analysis of the hex encoded shell codes in the file "51edea56c1e83bcbc9f873168e2370af" that lead to the decoding and unpacking of the stage 1 dropper.

Visual Inspection
Visual inspection of the file will reveal that the shell codes are actually hiding in plain sight. In this particular file, they are easy to tell apart from the rest of the extra bytes.


The analysis steps above will lead you to find 3 chunks of interesting hex encoded strings.

Decode the Strings
The chunks of hex encoded strings are decoded using a handy python script. The result is 3 binary files.


Analyze the file sizes and byte distributions
The file size of third chunk is significantly larger that the first two chunks and the analysis of the decoded bytes surfaces an interesting fact - the byte 0xDE has the most occurrences, and makes up 25.6%. This suggests that this binary chunk is XOR ^ 0xDE encoded.


Decoding the Packed Dropper
Based on the information gathered from analyzing the bytes, proceed to XOR ^ 0xDE decode the file and retrieve the packed dropper.


Introduction:
Persistence mechanisms refer to any functionality that help the malware continue to operate in it's environment. These include the termination of anti-virus,anti-malware or any process/service that hinders it's operations.


Using DeleteService API to Terminate Services
The following subroutine is part of the function that deletes services (renamed to Mod_Svcs_DeleteSvc). Prior to this function call, the malware will attempt to open a particular service, set the source index (ESI) to it's service handle and call the Mod_Svcs_DeleteSvc function. 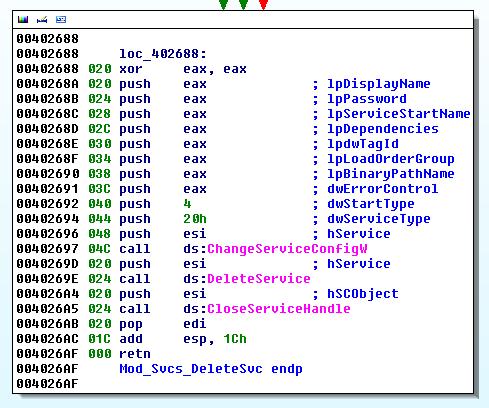 The calling function of Mod_Svcs_DeleteSvc iterates through a fixed set of specific services to delete. 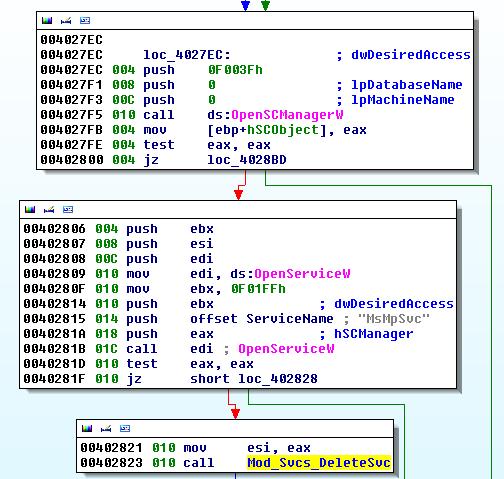 Zero Access will attempt to delete the following services:

Notice the two HTTP GET strings. They are likely to be callback URLs for communications with a command and control server of sorts. 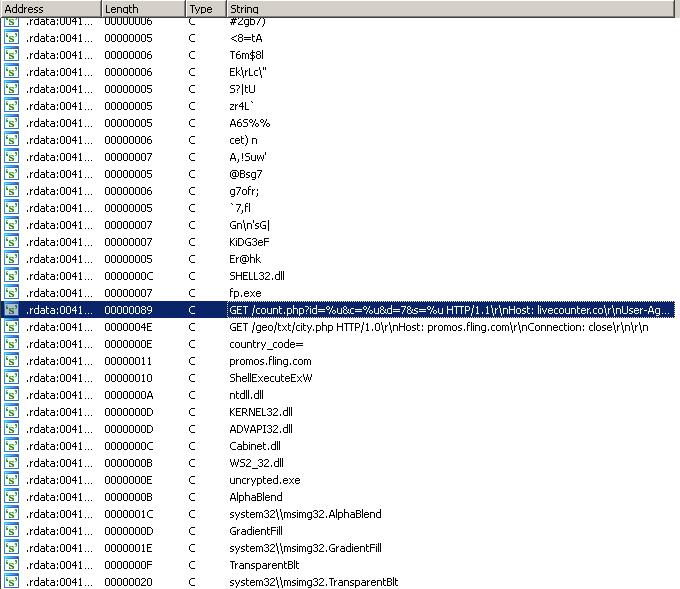 Picking one of them for a closer look.

Now, isolating the functions that work with this string: only one function to prototype. 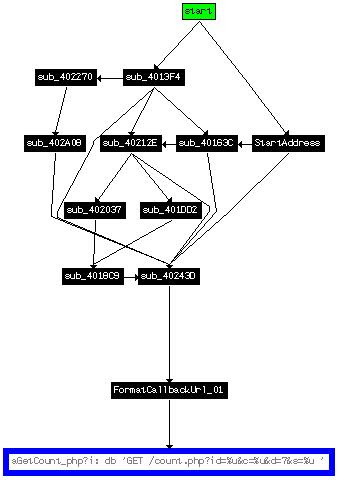 Lets look at the function in IDA: note that it takes in one INT argument. The parameter maps to a query string variable called "s". 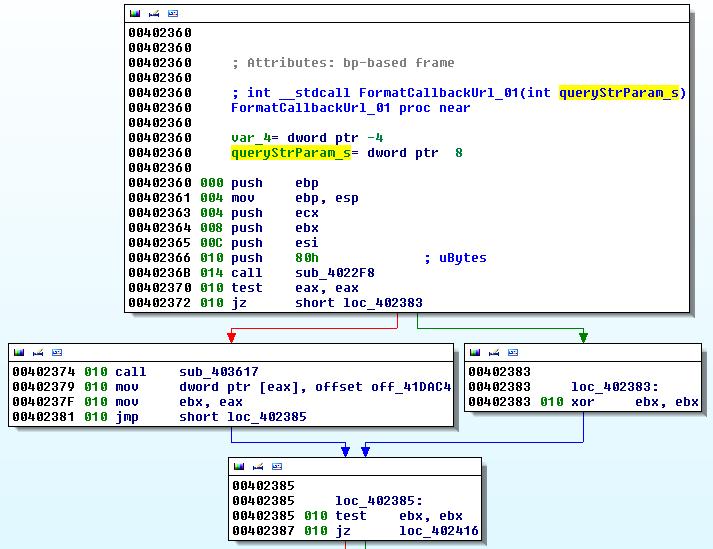 The formulation of the HTTP GET request happens here. 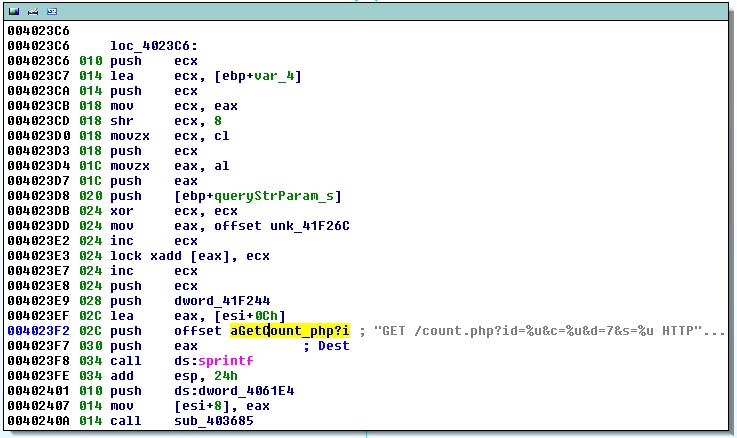 A closer look at the query string params on the stack (illustrated using notepad).

And the query is pushed to the stack after it is formulated.

A cleaner representation of the callback query. 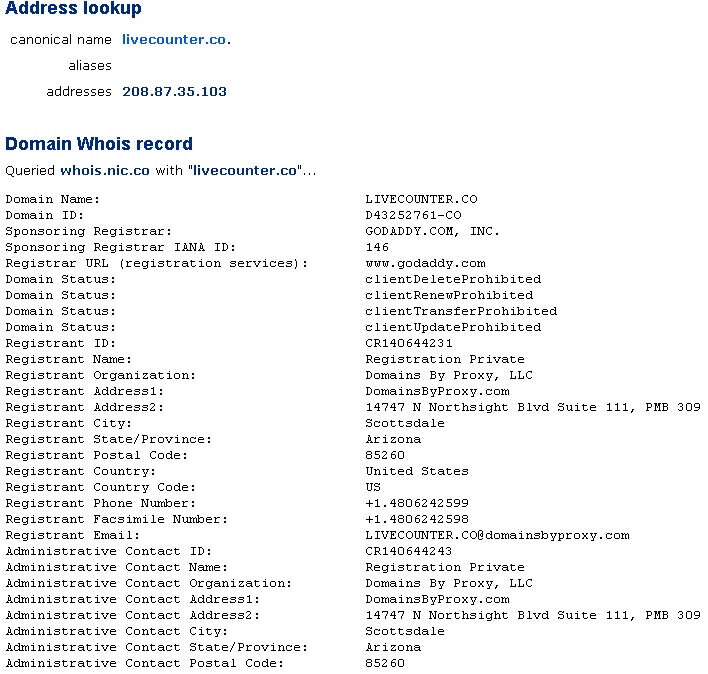 Analysis of the second HTTP Get string surfaced the following callback query. 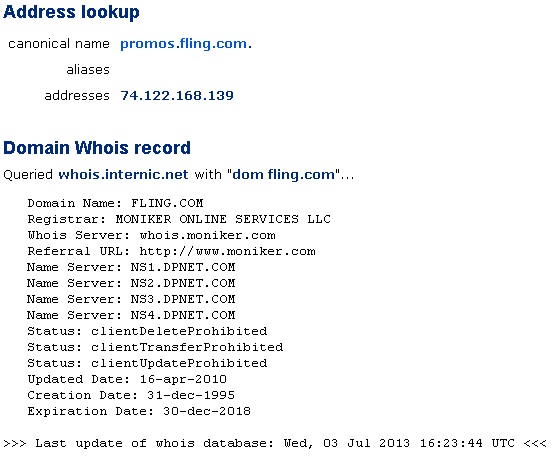 Objective:
- To unpack this variant of Zero Access and retrieve the underlying payload for analysis.

@the second LocalAlloc, note the parameters of the call [SIZE = 1E604]:

@the return of the second LocalAlloc, Note the value of EAX [START ADDRESS = 0x16ADE8], the address space 0x16ADE8 is still vacant.


@the first LocalFree call, the encrypted payload bytes have been written to 0x16ADE8:


@the third LocalAlloc call, the payload bytes are decrypted! Time to take a dump.


And dumping the exe. 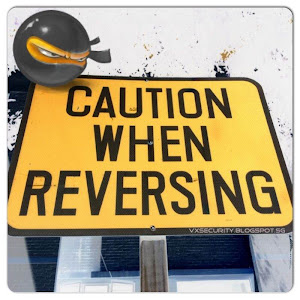